Absurdia is an absurdist modern fantasy roleplaying game about the inane hilarity and understated horror of everyday life. Inspired by works of absurd humor, surreal horror, and literary nonsense like Welcome to Night Vale, Alice in Wonderland, Gravity Falls, and the Twilight Zone, Absurdia is an opportunity to indulge in the surreal and outlandish while subverting the absurdity of modern society.

When you play this game, you’ll play people trapped in a suburban town unmoored from space and time, wracked by the surreal entropy of chaos. You’ll contend with arcane bureaucracy, sentient machines, maniacal PTAs, malevolent garden flora, and the occasional cosmic horror as you attempt to survive, overcome, and perhaps even escape the darkly idyllic community. Absurdia's game mechanics are Powered by the Apocalypse.

Absurdia has been fully funded through a successful itchfunding campaign! In the coming months, the game will be updated with additional artwork, graphic design, digital assets, and fully fleshed out setting developed by guest writers that can be easily picked up for one shot play. Keep an eye on the devlog for updates.

The current version of Absurdia, v0.9, contains all the information and resources that you need to play the game. If you purchase a copy, you will receive all future digital updates to the game without having to pay again.

As the game will receive regular updates, any playtest notes or other feedback is welcome! You can send them to qmajeski@gmail.com.

In order to download this game you must purchase it at or above the minimum price of $12 USD. You will get access to the following files:

Support this game at or above a special price point to receive something exclusive.

Each sale of Absurdia adds a Community Copy, which is available for any member of the community for whom the listed price would be a financial burden. If you're unable to purchase a copy of the game, please claim one of these community copies, no questions asked.

Won't you be my neighbor? Help bring Absurdia to life with a few extra dollars for art, layout, and writing partnerships. Purchase the game at this level and your name will be included in funders' honor roll in future updates to the book, plus I will add three community copies to the pool.

I just ran my first session last night and had a blast with it. Everyone loved the character creation process and the gameplay was weird, wacky fun. I cannot wait to see what content you add in the future.

Hilarious, adventurous, on-point. What else is there to do with the farce and inanity of every day living then turn it into a game?

This is really fantastic, captures the feel of the source material so well. Cannot wait to run it!

Quinn is a brilliant creator, and I can't wait to run this with my TTRPG group.

Super excited to bring this to my table. The playbooks are evocative and sparked my imagination immediately. Also refreshing to find a game that knows it's strong enough to not lean on combat for its tension and sense of danger. Excellent game. Highly recommend.

Absurdia is so much fun! I have been lucky enough to play a few times while the game was in development and absolutely loved it. The setting and playbooks are dripping with inspiration which makes telling exciting and whacky stories come so easily.

I left a rating and review, but I wanted to make sure I left one somewhere everyone could see:

Possibly one of my favorite PBTA games that I've ever played, as a playtester I have been looking forward to this release with much anticipation. As an enormous fan of Gravity Falls, if you've ever wanted to play a game that revels in the absurdity, horror, and banality of every day life, but with a fantastical twist--this is the game for you. I mean, name me any other game where you can play what is essentially an office wizard?
If you're not convinced, let me paint you a word picture. In my playthrough, I played as Hal Beardson, a Curio cursed to both attract the very same eldritch objects that had caused many the sudden and absurd death of their family members. As one my curios, I chose The Burnt Feather of Icarus. To distract the agents of the strange funhouse-mirror horror show mall we'd found ourselves in, Hal activated the power of flight with the feather...only for me to roll quite poorly. And so, Hal Beardson flew too close to the overhead LED sun--er, lights--and their beautiful feather wings melted as they fell to the floor.
This was just one of the many hilarious and absurd things that we experienced playing through this game. The gameplay is incredibly fun and intuitive, the playbooks absolutely RULE, and the vibes are immaculate. Give it a chance! You won't be disappointed.

I have play tested Absurdia and cannot recommend it enough!

This game sounds so cool! Adding it to my wishlist now! 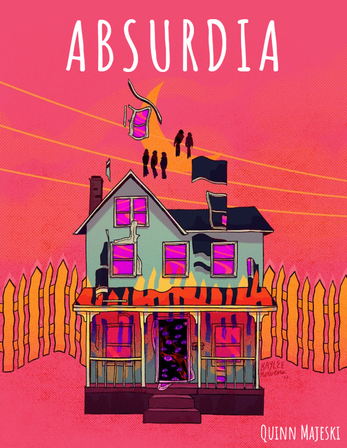 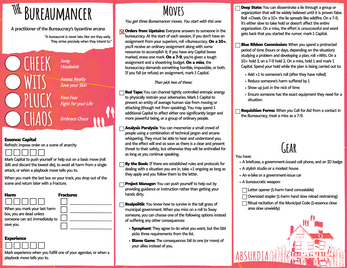 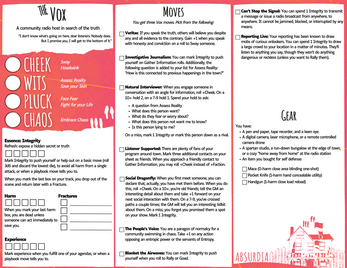